FREE EXPEDITED SHIPPING ON ALL ORDERS IN THE USA OVER $50!

Your cart is currently empty.

What You Need is a Proof and Tralle Hydrometer 0 - 200 Scale. More Tips on Making Hand Sanitizer HERE

When I started to brew in early 1993, no one I knew used a stir plate. That count included all of the hardcore amateur brewers I knew at that point in time and throughout my first pass through the hobby.  I brewed all-grain beer and maintained a yeast bank on agar slants for over a decade before taking a hiatus to focus on my family.  When I came back to the hobby in 2013, everyone was using a stir plate and proclaiming that a stir plate was a “must have” if one was going to make starters.  My experience with yeast cultures did not align with this assertion.  However, being inquisitive, I played along and purchased a stir plate and bar.  The performance of my cultures did not match what was promised. The media was so foul smelling after turning off the stir plate that I ditched it and went back to my old way of making a starter.

This blog entry covers yeast propagation in general, claims made by proponents of stir plates, and my method of making and handling a starter.  My method is not the do, be all yeast starter method, but it provides a simpler, lower cost way of making a starter that performs just as well, if not better than one made using a stir plate.

Brewers and liquid culture propagators use what is known as batch propagation.  Batch propagation is used when the medium is above the Crabtree threshold, which is 0.2% w/v (a specific gravity of 1.0008).  The Crabtree effect states that whenever the medium is above the Crabtree threshold, Crabtree positive yeast cells will replicate using their anaerobic (fermentative) metabolic pathway even in the presence of O2.  All brewing yeast strains are Crabtree positive.  Brewing yeast cells never truly respire when grown in a medium that is above the Crabtree threshold.  Instead, they shut O2  and a small amount of carbon (sugar is carbon bound to water) to the aerobic (respirative) metabolic pathway for the production of ergosterol and unsaturated fatty acids (UFA) during the lag phase.  Ergosterol (the plant equivalent of cholesterol) and UFAs keep cell plasma membranes pliable, which, in turn, allow sugar and waste products to pass through these membranes.

Unlike batch yeast propagation, dry yeast propagators use continuous propagation.  They do so using something known as a bioreactor.  A bioreactor can keep the medium in a steady state below the Crabtree threshold while continuously supplying O2 .  The medium is stirred to keep it homogenous.  The stirring action creates shear stress, which is detrimental to yeast cell wall health.  However, it is necessary to keep the medium in a steady state.  Keeping the medium oxygenated in a steady state below the Crabtree threshold results in yeast cells using their much more efficient aerobic (respirative) metabolic pathway for reproduction.  Ethanol, higher alcohols, and esters are the result of the inefficient conversion of carbon to energy in fermentation.  These compounds are all carbon based; therefore, we can think of them as the yeast cell metabolism equivalent of incomplete combustion.  The byproducts of respiration are CO2 gas and water.  Yeast cells derive two ATP (adenosine triphosphate) per glucose via fermentation and eighteen ATP per glucose from respiration pathway (ATP is what powers yeast cells).  In effect, the respirative metabolic pathway is nine times more efficient than the fermentative metabolic.  What this increase in efficiency means to dry yeast producers is that they need less carbon than liquid yeast propagators for any given cell count.  Not only that, yeast cells propagated via the respirative metabolic pathway have fully charged ergosterol and UFA reserves when they are pitched, which significantly reduces initial dissolved O2 requirements, usually completely alleviating the need to oxygenate wort.

Claims Made by Proponents of Stir Plates

If I had a dollar for every time a new brewer was advised to purchase a stir plate for making yeast starters, I would be able to build a very nice custom brew house.  As mentioned above, a stir plate has become a “must have” piece of equipment after a new brewer advances beyond the kit beer stage.  In  my humble opinion, a stir plate is a “not needed” piece of brewing equipment.   What bothers me are the claims made when discussing stir plates, none of which appear to be grounded in science.  That being said, let’s examine claims made by proponents of stir plates.

It is claimed that stir plates oxygenate yeast cultures.  However, anyone who has studied physics and chemistry knows that the shape of an Erlenmeyer flask does not lend itself to O2 absorption.  The conical shape of an Erlenmeyer flask combined with its rapidly narrowing cone leads to a small specific surface area in which O2 can be absorbed.  People claim that spinning the bar fast enough to create a vortex improves oxygenation.  To a point, that claim is true because it results in an increase in specific surface area.  However, doing so comes at a cost to yeast cell wall health due to shear stress caused by the spinning bar (i.e., the spinning bar is a source of friction for the yeast cells in a starter).  Shear stress is something that has been well studied when it comes to the production of dry yeast.

Many amateur brewers use the argument that stir plates keep yeast cells in suspension.  This claim is true, but the cells they keep in suspension are non-viable or cells prone to early flocculation, neither of which are desirable. The counter to this argument is that brewing yeast cells do not need to be stirred to remain in suspension because they express the NewFlo phenotype.  NewFlo yeast strains do not flocculate until they have consumed all of the mannose, maltose, sucrose, glucose and the sugars that they can reduce to one of these four sugars in the wort, including maltotriose, which is composed of three glucose molecules bound by two glycosidic bonds (a molecule of maltotriose is first reduced to a molecule of glucose and a molecule of maltose, which is then reduced to two molecules of glucose).

The reality is that all propagation mediums have a maximum cell density that places an upper bound on the number of viable cells that can be produced given a specific volume.  The generally accepted rule of thumb in brewing is two hundred billion cells per liter. The amount of yeast sediment available after a yeast culture has entered quiescence and sedimented does not matter.  What matters is the number of viable cells in the yeast sediment.

There is not a more troubling claim in amateur brewing than stir plates produce healthier cultures. Not only is this claim wrong, the practice of allowing a starter to enter quiescence and settle out, so foul smelling medium that is the result of stressed yeast cells can be decanted misses the point.  What we are doing when creating a starter and then pitching it into a larger batch of wort is known as step propagation.  Allowing a starter to ferment out places the cells in a quiescent state where they have undergone morphological changes to guard against starvation.  An important morphological change that occurs is thickening of the cell wall.  That morphological change occurs in order to extend the time between sedimentation and autolysis, which occurs when a cell wall breaks down and releases the contents of a cell.  Allowing a culture to enter quiescence extends lag time because the cells have to reverse the morphological changes they underwent before they can go about replenishing their ergosterol and UFA reserves.

I remember the pushback I received when I introduced the Shaken, not Stirred method of making starter on the American Homebrewers Association forum.  The response I received made me feel like I had slapped someone’s puppy.  People could not believe that something so simple could perform as well, if not better than a stirred culture.  However, one by one, forum members started to give my starter method a shot.  It was like the floodgates of acceptance had opened after Denny Conn gave it as shot and wrote about his experience.  Let’s discuss how SNS came about and why it works so well while being simple and low cost.

The Shaken, not Stirred (SNS) method of making a starter is something that I stumbled upon in the early nineties.  It was the result of being much stronger than I am today due to being a gym rat in my twenties and early thirties.  SNS started out as just a way to disperse yeast cells after inoculating a starter.  I was using a half-gallon glass container to make quart-size starters. That container broke one day, so I used the only other glass container I had on hand with a screw on cap, which was a one-gallon glass jug.

After I switched to using a one-gallon jug for making quart-size starters, I noticed that the increased volume of the container combined with intense shaking resulted in a large portion of the medium being transformed into foam.  The difference in lag time and fermentation strength appeared immediately.  However, I took a while before the engineering side of my brain recognized why the SNS method produced a higher quality starter. The secret sauce is the large amount specific surface area provided by foam, which allows for significantly more O2 absorption than the standard air to liquid interface.  In essence, SNS is a poor man’s O2 bottle.  One can achieve the same result with an  O2  bottle and a diffusion stone.  It is just that SNS achieves this feat in a much simpler, lower cost way.

With that said, it is not just the shaking in the SNS method that leads to a higher quality starter.  It is the fact that the method involves pitching the entire starter at high krausen.  High krausen is the point where the culture switches over from exponential growth to the stationary phase where replication is for replacement only.  Allowing a culture to ferment beyond this point results in wasted ergosterol and UFA reserves.  These compounds are produced during the lag phase and are shared by mother cells with all of their daughter cells.  We do not want to allow a starter for ferment past high krausen because doing so will result in extended lag times and higher initial O2 requirements in order to allow mother cells to rebuild the ergosterol and UFA reserves that were wasted on replacement replication during the stationary phase.  Remember yeast cells are in a battle with bacteria cells for ownership of the wort and bacteria cells replicate three times in the period of time that is required for the yeast cells to replicate; therefore, anything we can do to shorten the lag phase is beneficial to fermentation.

The “stir plates produce higher viable cell counts and healthier yeast cultures than other methods” myth is just that, a myth.  Every starter volume has a maximum cell density, which if met before available sources of carbon have been depleted cannot be exceeded.  My suggestion is to give the SNS starter method a try.  All one needs is a sanitizable container that is at least four times the volume of the starter wort (I use a five liter media bottle for one liter starters).  The starter medium can be shaken before or after pitching.  It depends on one’s threshold for yeast cell stress.  However, if one pitches after shaking, the starter will need to be shaken a second time to disperse the cells, albeit much more gently.  The initial shake needs to be performed like the starter wort owes one money.  The goal is to attempt to transform as much of the starter wort into foam as is humanly possible. The photo shown below is my old five-liter media bottle. 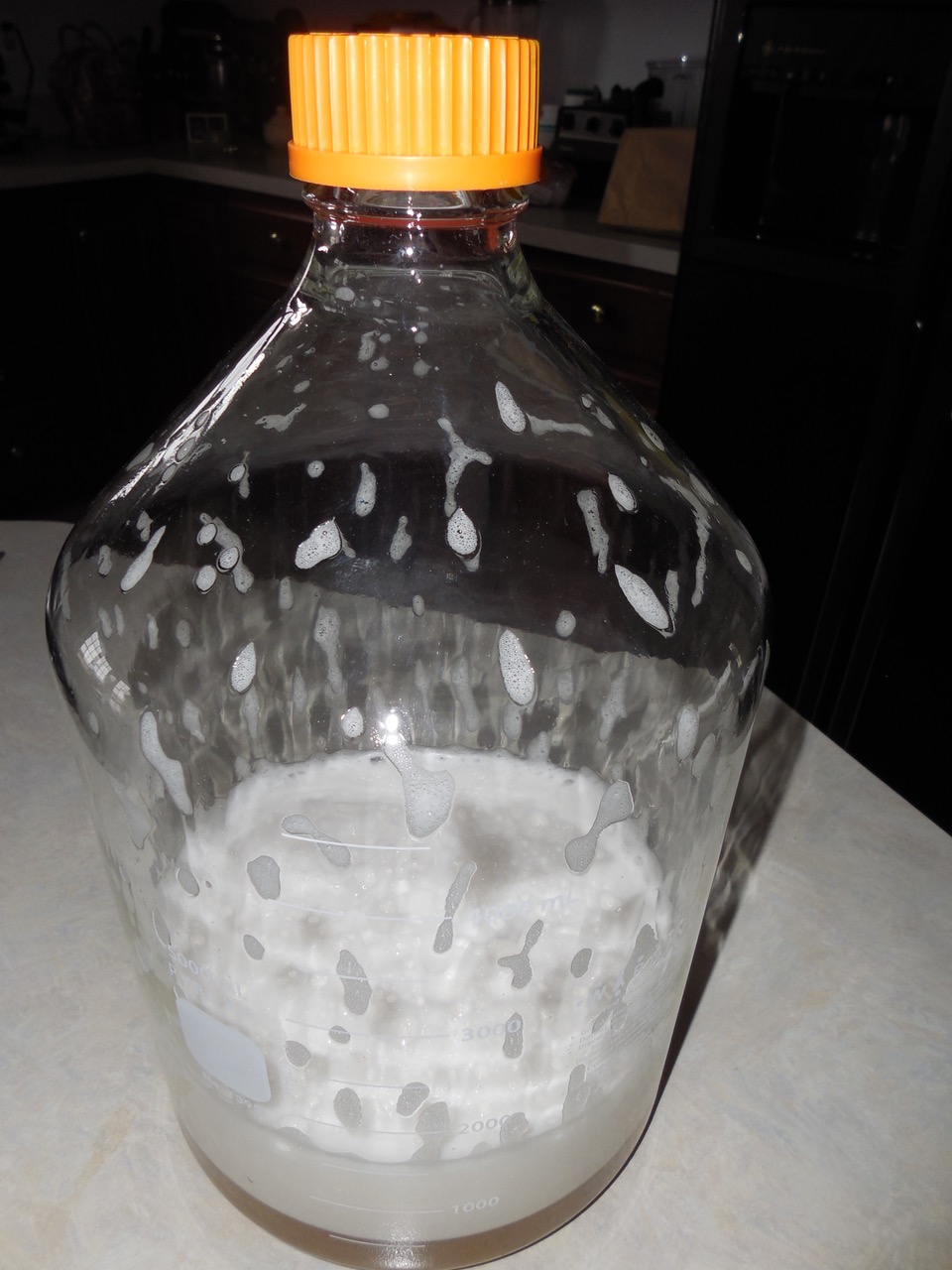